In general, it is believed that fear is associated only with women in the society. There is a common perception that fear has a part in the personality of young women, but fear has nothing to do with young men. However, the truth is that men are also afraid. Fear is also hidden in their hearts. No matter how much bravery they display outwardly, fear exists in some corner of their mind. To put it more clearly, every man has a child alive in his heart for the rest of his life who is afraid again and again.

Men are afraid of rejection. No matter what the stage or context of life, the fear of being rejected by someone always haunts men. When someone says no, their ego gets hurt. If your girlfriend or friend rejects you, what should you do? If the young man gets a negative response when he makes a big bold proposal to a girl he likes a lot, then the young men are worried about hunger and sleep.

It is our social trend to associate working and earning enough money with the merits of men. Regardless of education, a young man without income is considered unfit. There is pressure on men to work to earn money after completing their studies. Therefore, even after studying, they are always haunted by the fear of not getting a job. The idea that a boy should earn is imposed on men from a young age, so the fear of proving himself incompetent in the matter of earning never leaves a man.

Fear of not being able to raise social status

Adequate bank balances, luxurious palaces, fancy cars and a rush to fulfill every need of family members. No man is afraid that if he is unable to fulfill these things, his social status will fall. On the one hand, the responsibility of fulfilling every need of the family who wants to live a modern ace-comfortable life, on the other hand, the mentality of not being seen less in front of others in the society puts pressure on men to earn money in any way.

Being alone is not easy for men. To avoid that, men always look for a life partner who will give them love and support. After finding a spouse, they want children. A man who tries to forget all his sorrows by seeing them when he returns from work falls into this world to avoid loneliness. The fear that the family that protects him from loneliness will be disorganized or not suitable for him always remains in the heart of men.

Men love their girlfriend or wife more. They are always trying to fulfill their every wish – common man. They always want to hear their beloved say to them ‘I love you very much’ and think that they should love them deeply. In order to achieve such depth of relationship, men wear Jizyan and Kudakud. Despite doing all these things, they are always haunted by the fear that their beloved will cheat on them.

Men want to be successful in every walk of life. Their desire to associate success with victory and failure with defeat is always entangled in the mathematics of defeat. Will you get success in life or not? Will the dream come true or not? Isn’t every wish unfulfilled? After getting close to success, don’t you have to face failure? Men are afraid of being trapped in many traps. Be it money or love, no man wants to fail.

No matter how strong and determined they appear from the outside, men live with so many fears within themselves that can be seen reaching the corners of their minds. To say that men are fearless or fear has nothing to do with men is nothing but a fallacy created by social norms. The reality is that men have different fears just like women. In the question of fear, there is no difference between genders, that is, fear is also present in men’s minds. 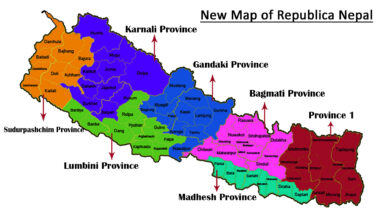 New Map of Nepal with 7 Province and District

Travel attractions and tourism of Bhairava or Siddharthnagar