One day, Emperor Akbar announced in the Rajya Sabha that whoever answers my three questions will get a huge reward from me. The question was: 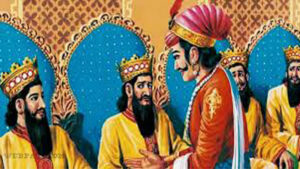 None of the Rajya Sabha members present had an answer to Akbar’s complex question. But Birbal, Akbar’s minister, got up and said, “Sir! I can answer your questions, but for that you have to walk the city with me. Only then will you get the right answer to your question. ”Akbar and Birbal in Rajyasabha 1

Akbar agreed with the minister and the two disguised themselves and headed for the city. After a while they reached a market and entered a place where there was a shopkeeper. Birbal told the shopkeeper that a school had to be built to educate the children and for that some help was needed, you give us 100 rupees.

Then the shopkeeper asked his servant to give them 100 rupees. Birbal added another thing: “When I am taking money, I will hit you on the head with shoes instead of every rupee. Do you agree?” Hearing Birbal’s words, the servants became angry and started abusing him. But the shopkeeper calmed his servant down and agreed with Birbal, saying, “All right, but I have a condition.” Promise me that this money should be used for good work as you said. ” The shopkeeper bowed his head and asked to hit his shoes.

After that Akbar and Birbal left without saying anything and when they reached outside, Birbal opened his mouth and said to Akbar- “Huzur! That was the answer to your first question. The shopkeeper has money today and wants to use that money for good work so that his name will be associated with good work in the future. That means he has that thing today and will have it tomorrow .

Then they came to a place where there was a beggar. At that time, the beggar was being given some food by a passenger and that food was too much for one person. Seeing this, Birbal approached the beggar and begged him to give him some food. But the beggar chased Birbal away and refused to distribute food. Birbal said to Akbar, “Did you see the answer to your second question, sir?” What this beggar has today, he does not want to share with anyone else, he wants to share all the happiness alone. What happiness will such a person get later? This means that what this person has today will not happen tomorrow . ”

The two of them proceeded again and reached the place where an ascetic was. Birbal placed the 100 rupees he had received from the shopkeeper in front of the ascetic. Then the ascetic said to remove this filth of wealth from in front of me. I need peace, not money. Birbal brought Akbar here and said, “This was the answer to your third question, sir!” These people don’t want anything today for tomorrow’s achievement. It means he has nothing today and he will have something tomorrow . ”

Conclusion: From the example of Birbal, it can be learned that the sin or virtue committed by a human being in his life should always be carried with him. He himself is a partaker of his deeds. He will get the same reward as he did. So we have to leave the path of falsehood and move towards the path of truth. This is our supreme religion.

Why Is The Child In Hands Of The Beggar Always Sleeping? 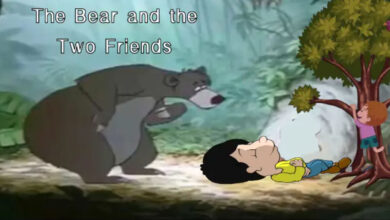 The Bear and the Two Friends